I was taking my daughter to Laguardia Airport to meet her mom, who would then take the girl on to Chicago for a few days’ holiday-time visit. Laguardia is a large airport, with many terminals, and as I hadn’t bought the ticket and wasn’t flying, I didn’t know which of the many terminals to go to.

So the day before my daughter’s trip, I visited Southwest’s website and punched in the flight number. It is a recurring flight from New York to Chicago that takes place every weekday at the same time. The website told me that the flight had left for the day. It couldn’t tell me the terminal of departure or anything else.

Next I punched in the confirmation code for my daughter’s flight. Her mother had already checked her in, and sent me a digital copy of the boarding pass, which I needed to get through airport Security, and which also didn’t have a terminal or gate number—not surprisingly, since, even for a recurring flight, gates aren’t typically assigned until a few hours before the flight departs. I didn’t expect a gate, but a terminal would be nice. When I punched in my daughter’s confirmation code, there was still no sign of a terminal.

So I scoured the entire Southwest website. No mention of terminals anywhere.

When all else fails, call the company.

As you might expect by now, it took work to find Southwest’s phone number on its website, and when I did find it, it was one of those 20th Century mnemonic numbers that are hard to use and rather meaningless in the age of smartphones: 1-800-I-FLY-SWA.

You will not be surprised to learn that I sat through a long, unskippable audio menu full of slow-talking sales puffery before I was offered the chance to say “agent” and speak to an agent (which I needed to do since none of the menu options led to the information I wanted). After I said “agent,” the robotic voice told me, “Okay, I will connect you to an agent,” and hung up on me.

I went through this three times to make sure I wasn’t going mad and there was in fact no chance of reaching an agent.

To summarize so far: basic information not on company website. Hard-to-use phone number did not provide info in its menu, and hung up every time it promised to connect me to an actual human agent.

So I used the contact form on the company’s website to ask my question (requesting an answer the same day if possible), and to report the usability problem on the company’s phone system, wherein if a human asks to speak to an agent, the system agrees to provide an agent and then hangs up on the customer.

Today—the day after my daughter’s flight—I received via email a form letter from Southwest apologizing for not getting me the information in time (and still not giving me the information), and advising me to solve my own problems in the future by using Southwest’s super-useful toll-free number for concerns that require immediate assistance.

I guess the person who sent the form letter hadn’t read the second sentence of my two-sentence request for help, where I mentioned that the toll-free number was broken.

Here, in its entirety, is Southwest’s response:

Thank you for your email. We certainly wish we had been able to touch base with you prior to your travel. We realize how important it is to respond to our Customers’ concerns in a timely manner, and we regret disappointing you in this regard. For future reference, you may contact our toll-free number, 1-800-I-FLY-SWA, for concerns that require immediate assistance.

We appreciate your patronage and hope to see you onboard a Southwest flight soon.

You can’t make stuff like this up. The last sentence is my personal favorite. There’s nothing like a file reference number to cheer you up after experiencing failure at every customer experience point you touched.

In the end, because my kid’s mom had shared the flight details, Tripit texted me the terminal information hours before I needed it. Terminal B, which is about two-thirds the size its needs to be for the amount of traffic it handles, was predictably mobbed with holiday travelers. There was not a free seat in the house. 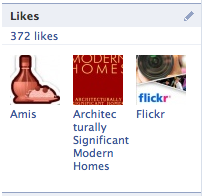 I’M ON FACEBOOK. I want to see everything I supposedly “like” and prune the list of things I don’t. There should be a page where I can do this—that’s UX Design 101—but instead there’s just a sidebar box on my profile page showing a rotating, random sampling of liked items. The box is fine as an outward-facing device: on my profile page, it gives visitors a teasing hint of some of the cool stuff a deep guy like me digs. But inward-facing-wise, as a tool for me to manage my likes, it’s useless.

At the top of sidebar box, there’s text stating that I currently have “372 likes.” The text is a hyperlink. Here’s what should happen when I click that link: I should be taken to a page listing my likes (or the first, say, 100 of my likes, with a pagination tool). Each liked item should link to its corresponding Facebook page in case I need to refresh my memory about it. (This is the one part Facebook actually gets right.) More importantly, each liked item should be preceded by a checkbox. I should be able to check off 50 items on the page that I no longer like, and press a button allowing me to delete them all at once.

A number of elegant variations will occur to even the least experienced interface designer at this point: Perhaps there’s a drop-down allowing me to choose functions other than deletion; perhaps there’s a link to “select all” or de-select all; and so on. Such variations could make Facebook’s hypothetical best-practice “like management” page easier, faster, or more pleasant to use. But they are pretty much beside the point, as Facebook does not provide a like management page when I click that stupid link.

When I click that link, what I get instead of a useful, simple management page—the kind we’ve been building in hypertext for over 15 years—is a small, in-page pop-up window, with a scrolling sidebar … because, like the sidebar box, this window is also a tease instead of a tool.

Inside that scrolling box is every item I’ve liked. I have to scroll to see anything beyond the first handful of liked items. There are no checkboxes. There is no master switch to delete one or more items. There isn’t even an in-place deletion button beside each listed item, like the primitive edit tool in the first iPhone 3G.

No, my friends. There’s nothing.

If I want to delete a liked item, get this! I have to click the item’s hyperlink, go to the individual item page, and then hunt around on that page in search of a tiny link that would let me “unlike” that item. If I manage to find that link and unlike that one item, there’s no confirmation dialog, and I’m not returned to the floating box, because the item’s like page doesn’t know about the box.

All that JavaScript, and no connections. All those pages, and not even the most basic tools.

Hey, they have the stats, they know what their users do and don’t do.

Facebook is a charnel house of features that appeal to advertisers and businesses without actually being used, supported by tools that don’t work, for people who don’t care.

Now I, uh, like Facebook fine, for the same reasons you do (if you do), and I generally ignore its well-branded but otherwise abortive gestures toward key features that have made it famous without actually doing a damned thing—“like” being the people’s Exhibit A. But as a designer, it bothers me, not only because badly designed things bother designers, but because badly designed things in a highly successful product spur a lust for imitation. I don’t want our clients to think “like” works. I don’t want them desiring similarly broken functionality on sites we design for them. I don’t want them thinking users don’t need tools that work, simply because millions of users don’t complain about broken tools on Facebook. Tools like like and its sad little pop-up.

A veteran strategist and instructor, user experience director Kevin Hoffman creates compelling online experiences via patient research and sparkling creative insight. Prior to joining Happy Cog, he spent more than a decade building sites, developing strategies, and leading projects for colleges and universities in Baltimore. Kevin joins our Philadelphia office; we are thrilled to have him.

Co-inventor of a patented search tool for American Express, user experience consultant Whitney Hess has a bachelor’s in writing, a master’s in Human-Computer Interaction from Carnegie Mellon, and ten years’ experience making complex sites work beautifully. Her work for the New York office of Happy Cog will soon bear public fruit; we are delighted to have her on our team.

In Issue No. 265 of A List Apart, for people who make websites: The web is a conversation, but not always a productive one. In “Putting Our Hot Heads Together,” Carolyn Wood shares ways to transform discussion forums and comment sections from shooting ranges into arenas of collaboration. Plus: Because of limited awareness around Deafness and accessibility in the web community, it seems plausible to many of us that good captioning will fix it all. It won’t. In “Deafness and the User Experience,” Lisa Herrod explains how to enhance the user experience for all deaf people.

P.S. The Survey for People Who Make Websites closes Tuesday, August 26. Don’t miss your chance to help educate the world about the practice of our profession. Please take the survey and encourage your friends and colleagues who make websites to do likewise.

You know that new thing where you call customer support and a robot tells you that there’s no need to wait; just leave your phone number and you’ll be called back in three minutes? So you do it, and three minutes later, the robot calls you back and asks you to hold while your call is connected? And then you sit on hold for twenty minutes waiting to get connected?

A colleague who is interested in learning more about user experience (UX) design, information architecture, and usability, asked what sites he should visit. I suggested he check the UX Zeitgeist (beta) section of Rosenfeld Media. Not only is it UX Zeitgeist interesting and informative in its own right; it’s also a reasonable who’s who, with an index of 120 UX people, sortable by mindshare, books authored, and other facets.