Adelle and Adelle Sans have long been two of my favorite fonts—two great tastes that taste even better together! Now there are two more great flavors, with the release of Veronika Burian and José Scaglione’s twin-powered Adelle Mono family.

Adelle Mono is a true, monospaced version of the robust yet sensitively detailed font family.

Adelle Mono Flex is a proportional version that’s suited for text, branding, UI, captions, and screens: “It feels monospaced but reads like a nice slab,” TypeTogether explains in the June, 2020 issue of their newsletter announcing the release.

Much more information, along with a try-it-yourself type tester and a 60% introductory discount, is available on TypeTogether’s Adelle Mono web page.

(Note: Veronika Burian and José Scaglione designed the original Adelle and Adelle Sans, along with the new Mono and Mono Flex versions. Additionally, Irene Vlachou assisted in the creation of Adelle Mono.)

HE DESIGNED the lettering on The New York Public Library and the James Farley Post Office (“neither snow nor rain…”), created titles for silent movies, movie posters, and pulp magazines in the 1920s, and started working for DC Comics in 1938, where he designed the masthead for Action Comics, refined the Superman logo, and brought dozens of DC Comics texts and titles to life. A new exhibit at The Type Directors Club honors Ira Schnapp and sheds light on his decades of influential work.

Now there’s a way to transform your web typography at the touch of a button: introducing Stylistic Sets for webfonts at Cloud.typography.

OUR FRIENDS at Typecast shot a video of some of Happy Cog’s designers discussing readability in design and the importance of great type tools to our process.

“NOT EVERYTHING always works in your favor when you design for the screen. Interaction design is engineering: it’s not about finding the perfect design, it’s finding the best compromise.”

IN ISSUE No. 350 of A List Apart for people who make websites: keep your web type looking right across browsers, platforms, and devices; let users do stuff on your site even when they’re offline.

Say No to Faux Bold

Browsers can do terrible things to type. If text is styled as bold or italic and the typeface family does not include a bold or italic font, browsers will compensate by trying to create bold and italic styles themselves. The results are an awkward mimicry of real type design, and can be especially atrocious with web fonts. Adobe’s Alan Stearns shares quick tips and techniques to ensure that your @font-face rules match the weight and styles of the fonts, and that you have a @font-face rule for every style your content uses. If you’re taking the time to choose a beautiful web font for your site, you owe it to yourself and your users to make certain you’re actually using the web font — and only the web font — to display your site’s content in all its glory.

Application Cache is a Douchebag

We’re better connected than we’ve ever been, but we’re not always connected. ApplicationCache lets users interact with their data even when they’re offline, but with great power come great gotchas. For instance, files always come from the ApplicationCache, even when the user is online. Oh, and in certain circumstances, a browser won’t know that that the online content has changed — causing the user to keep getting old content. And, oh yes, depending on how you cache your resources, non-cached resources may not load even when the user is online. Lanyrd’s Jake Archibald illuminates the hazards of ApplicationCache and shares strategies, techniques, and code workarounds to maximize the pleasure and minimize the pain for user and developer alike. All this, plus a demo. Dig in.

From the floor of An Event Apart Seattle 2011:

“Mobile is huge. The iPhone, iPad, and Android are huge. On the one hand, they are standards-facing, because they all support HTML5 and CSS3, so you can create great mobile experiences using web standards. You can create apps using web standards. On the other hand, there is also the temptation to go a proprietary route. In a strange way, although the browsers are much more standards compliant, it seems like we are redoing the browser war. Only now, it’s not the browser wars, it’s platform wars.”

Video interview, plus transcript: Interview with Jeffrey Zeldman on the State of Web Design. Thank you, Michael Slater.

HEY, YOU WITH THE STARS in your eyes. Yes, you, the all too necessary SXSW Interactive attendee. Got questions about the present and future of web design and publishing for me or the illustrious panelists on Jeffrey Zeldman’s Awesome Internet Design Panel at SXSW Interactive 2011? You do? Bravo! Post them on Twitter using hashtag #jzsxsw and we’ll answer the good ones at 5:00 PM in Big Ballroom D of the Austin Convention Center.

Topics include platform wars (native, web, and hybrid, or welcome back to 1999), web fonts, mobile is the new widescreen, how to succeed in the new publishing, responsive design, HTML5, Flash, East Coast West Coast beefs, whatever happened to…?, and many, many more.

The panel will be live sketched and live recorded for later partial or full broadcast via sxsw.com. In-person attendees, arrive early for best seats. Don’t eat the brown acid.

Dutch design studio Experimental Jetset carried out the graphic design for Pioneers of Change—a festival of Dutch design, fashion, and architecture which took place on New York’s Governors Island in September 2009. The design system, which included a website, printed programs, and wayfinding elements, made prominent use of Franklin Gothic Extra Condensed

Nick Sherman discusses a smart application of my favorite font, Franklin Gothic, in the virtual pages of what might be my new favorite design website, Fonts in Use.

Fonts in Use: Pioneers of Change

MANDY BROWN (@aworkinglibrary) is our guest today, Thursday December 23, 2010 in Episode No. 32 of The Big Web Show, co-hosted by Dan Benjamin and recorded at 1:00 PM Eastern before a live internet audience.

Mandy is co-founder and editor for A Book Apart and a contributing editor for A List Apart for people who make websites. A veteran of the publishing industry, she spent a decade at W. W. Norton & Company, an independent and employee-owned publisher, where her work involved everything from book design to web design to writing about design. She serves as Community and Support Manager for Typekit and writes frequently on the Typekit blog.

Named “Video Podcast of the Year” in the 2010 .net Awards, The Big Web Show covers “Everything Web That Matters” and records live every Thursday at 1:00 PM Eastern on live.5by5.tv. Edited episodes can be watched afterwards, often within hours of recording, via iTunes (audio feed | video feed) and the web. Subscribe and enjoy!

P.S. This is the last Big Web Show session of the year. We’ll be off next week. (Something about Christmas and New Year’s.) Thank you for watching and listening. We love you bunches!

For nearly fifteen years, if you wanted to set a paragraph of web text in a serif typeface, the only truly readable option was Georgia. But now, in web type’s infancy, we’re starting to see some valid alternatives for the king of screen serifs. What follows is a list of serif typefaces that have been tuned—and in some cases drawn from scratch—for the screen. 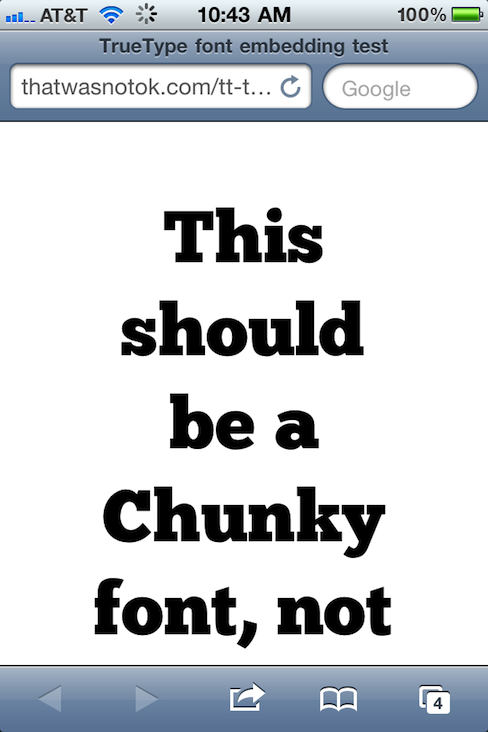 TrueType font embedding has come to iPhone and iPad, Hallelujah, brothers and sisters. That is to say, Mobile Safari now supports CSS embedding of lower-bandwidth, higher-quality, more ubiquitous TrueType fonts. This is huge. Test on your device(s), then read and rejoice:

iOS 4.2 is also the first version of Mobile Safari to support native web fonts (in TrueType format) instead of SVG. This is also exciting news, as TrueType fonts are superior to SVG fonts in two very important ways: the files sizes are dramatically smaller (an especially important factor on mobile devices), and the rendering quality is much higher.

Thanks to Matt Wiebe for mentioning the rumour that Mobile Safari on iOS 4.2 supports TrueType fonts and providing a handy link to test.

TrueType is an outline font standard originally developed by Apple Computer in the late 1980s as a competitor to Adobe’s Type 1 fonts used in PostScript. TrueType has become the most common format for fonts on both the Mac OS and Microsoft Windows operating systems.

The primary strength of TrueType was originally that it offered font developers a high degree of control over precisely how their fonts are displayed, right down to particular pixels, at various font sizes. With widely varying rendering technologies in use today, pixel-level control is no longer certain in a TrueType font.

If you’re coming late to the party, the following bits of required reading and listening will get you up to speed on the joys (and occasional frustrations) of “real type” on the web:

My thanks to David Berlow of Font Bureau for waking me from my Thanksgiving stupor and alerting me to this exciting slash overdue development.