EVERY YEAR I give a new talk at An Event Apart. And every year I panic.

After nearly two decades, public speaking no longer frightens me. But deciding what needs to be said gets tougher, and more terrifying, each year.

In 1998, when Hasan Yalcinkaya hired me to give my first public web design talk in, of all places, his glorious city of Istanbul, I wrote a speech for the occasion and read it aloud from the stage.

The following year, when Jim Heid hired me to keynote Web Design World Denver, I intended to do the same thing. But a fellow Web Design World speaker named Jeff Veen (who was also a colleague on The Web Standards Project) persuaded me to throw out my speech and “just tell stories.” I did it, it worked, and I’ve done it ever since.

For all my An Event Apart presentations since starting the conference with Eric Meyer in 2005, I’ve designed slides outlining the parameters of what I intended to talk about, and then spoken off the cuff.

But this year, inspired by the rigorous (and highly effective) speech preparation regimes of my friends Karen McGrane? and Mike Monteiro?, I’m once again writing a speech out word for word in advance. I will polish it like a manuscript. Only when it is perfect—logically structured, funny, passionate, persuasive—will I design accompanying slides.

I may read the speech out loud, word for word, as Mike sometimes does, or I may revise and practice it so often that I no longer need to see it to say it, like Karen. Either way, my talk this year should be tighter than any I’ve given in the past decade. Hopefully, that’s saying something.

I’m grateful to all my friends for their inspiration, and delighted that the panic and terror I felt at the start of this year, while contemplating creating a new AEA talk, has turned into the inspiration to approach the task a different way.

How do you approach public speaking? And if you don’t speak, what part of you is holding the rest of you back?

OCTOBER brings the smells of burning leaves, the warmth of hot cider, and much speaking for yours truly:

On October 12, I’ll deliver the keynote address at Do It With Drupal 2011 at the Marriott Brooklyn Bridge in Brooklyn Heights, sharing the stage with the likes of Josh Clark, Angela Byron, and Jeff Robbins.

Then it’s off to beautiful Richmond, Virginia on the 13th for EdUI 2011, the conference for web professionals who serve institutions of learning, where I’ll keynote again and join such leaders as Margot Bloomstein, Brian Fling, Kyle Soucy, and Siva Vaidhyanathan.

October 24–26 will find me in America’s capital for An Event Apart DC: three days of design, code, and content with a veritable constellation of web design stars, including a one-day learning session on Accessible Web Design led by Derek Featherstone of Further Ahead.

You can follow my speaking schedule or, better yet, come see me! I’ll keep a light in the window for you.

YOU FIND ME ENSCONCED in the fabulous Buckhead, Atlanta Intercontinental Hotel, preparing to unleash An Event Apart Atlanta 2011, three days of design, code, and content strategy for people who make websites. Eric Meyer and I co-founded our traveling web conference in December, 2005; in 2006 we chose Atlanta for our second event, and it was the worst show we’ve ever done. We hosted at Turner Field, not realizing that half the audience would be forced to crane their necks around pillars if they wanted to see our speakers or the screen on which slides were projected.

Also not realizing that Turner Field’s promised contractual ability to deliver Wi-Fi was more theoretical than factual: the venue’s A/V guy spent the entire show trying to get an internet connection going. You could watch audience members twitchily check their laptops for email every fourteen seconds, then make the “no internet” face that is not unlike the face addicts make when the crack dealer is late, then check their laptops again.

The food was good, our speakers (including local hero Todd Dominey) had wise lessons to impart, and most attendees had a pretty good time, but Eric and I still shudder to remember everything that went wrong with that gig.

Not to jinx anything, but times have changed. We are now a major three-day event, thanks to a kick-ass staff and the wonderful community that has made this show its home. We thank you from the bottoms of our big grateful hearts.

I will see several hundred of you for the next three days. Those not attending may follow along:

HEY, KIDS! GUESS WHO’s the keynote speaker at DIBI (pronounced “dibby”), the two-track Design It Build It web conference, June 7–8, 2011 at The Sage Gateshead venue in the Northeast of England? That’s right, it’s little old me. Join me for two tracks of design and development pleasure:

Keep up with my comings and goings on Lanyard and this site’s new Appearances page (in progress), follow me on Twitter (@zeldman), and keep watching the skies at An Event Apart, the design conference for people who make websites.

Above: Part of my deck for “Put Your Worst Foot Forward,” a talk on learning from mistakes at An Event Apart Seattle 2010.

Greetings, web design fans. I’m in Seattle doing the final prep for three days of kick-ass design, code, and content. Starting Monday, April 5 and running through Wednesday, April 8, An Event Apart Seattle 2010 features 13 great speakers and 13 sessions, and has been sold out for over a month. A Day Apart, a special one-day learning experience on HTML5 and CSS3, follows the regular conference and is led by Jeremy Keith and Dan Cederholm.

… And that’s just the first day.

There are also two parties (sponsored by our good friends at Media Temple and MSNBC) and seven more great speakers with topics of interest to all standards-based web designers.

It’s that time again. Spring and pheromones are in the air, and 11,000 web geeks are about to descend on beauteous Austin, TX for our industry’s version of the TED Conference plus Spring Break, SXSW Interactive.

Along with nearly all of Happy Cog, I’ll be there. Join us, won’t you?

The rest of the time, depending on what else is going on, I will probably be findable via my personal SXSW schedule. (Create your own with Sched by MailChimp.) You can also find me on SitBy.Us, a scheduling web app for iPhone or any good web-enabled phone, designed by Weightshift—and bless them and HTML, CSS, and JavaScript for it. Sitby.us members, my schedule is posted at http://sitby.us/zeldman/.

If you can’t be with us at SXSW, please watch this space and my Twitter feed for photos, links, etc.

And if you aren’t attending and couldn’t care less about SXSW, you might want to unplug for the next six days, because the internets, they will be filthy with SXSW tweetage, bloggage, Flickrage, retweets, retumbling &c.

Whether it’s in front of a huge audience or a handful of executives, smooth public speaking is essential to a successful web design career. Yet most of us are more afraid of speaking in public than we are of death. In a lively give-and-take, Liz Danzico interviews Scott Berkun, author of Confessions of a Public Speaker, for tips on how to prepare for public speaking, how to perfect your timing, and what to do when bad things happen.

Interview with Scott Berkun by LIZ DANZICO & SCOTT BERKUN, in A List Apart Issue No. 301

Headed to SXSW Interactive? Concerned about the future of books, magazines, and websites? Attend “New Publishing and Web Content,” a panel I’m hosting on the creative, strategic, and marketing challenges of traditional and new (internet hybrid) book publishing and online magazine publishing, and how these fields intersect with content strategy and client services.

Joining me in a thoughtful exploration of new and old business models and creative challenges will be people who’ve spent a decade or two butting up against and reinventing these boundaries:

As moderator, my job will be to let these geniuses speak, to occasionally lob the right question to the right genius, and to help field your questions from the audience.

If you work in web or print publishing, or just care about the written word, please join us at 5:00 PM Central Time in Ballroom A.

(What else am I doing at SXSW Interactive? Here’s my schedule so far. I also hope to see some of you at OK Cog’aoke II, SXSW Interactive’s premiere karaoke event and best party, hosted by your friends at Happy Cog.)

Dan Benjamin and yours truly discuss the secret history of blogging, transitioning from freelance to agency, the story behind the web standards movement, the launch of A Book Apart and its first title, HTML5 For Web Designers by Jeremy Keith, the trajectory of content management systems, managing the growth of a design business, and more in the inaugural episode of the Pipeline. 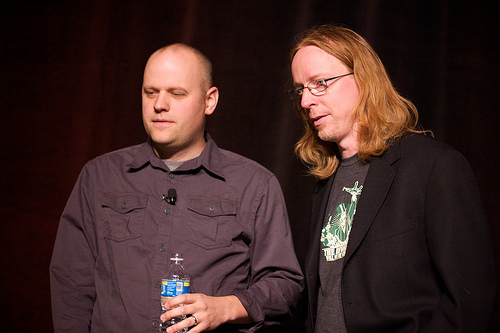 An Event Apart Chicago has sold out. If you wanted to join us in Chicago on October 12–13 for two days of design, code, and content, we’re sorry to announce that the show has completely sold out. There’s not a spare seat to be had.

We’re sorry about that.

But, hey. If you can’t be with us in Chicago next week, please join us in San Francisco later this year. Or come see us in 2010 at any of these fine cities:

In “New Publishing and Web Content,” a proposed panel for SXSW Interactive, I will lead book and new media publisher and entrepreneur Lisa Holton, designer, writer, and W.W. Norton creative director Mandy Brown, novelist, web geek, and Harper’s editor Paul Ford, and writer, editor, and content strategist Erin Kissane in an honest and freewheeling exploration of the creative, strategic, and marketing challenges of traditional and online publishing—and how content strategy and design can help.

Topics covered will include:

If this sounds like a panel you’d enjoy seeing, vote for New Publishing and Web Content via the SXSW Interactive Panel picker.

When you’ve paged your way through those, have a gander at Think Brownstone’s extraordinary sketches of AEA Seattle.

Still can’t get enough of that AEA stuff? Check out the official AEA Seattle photo pool on Flickr.

Wonder what people said about the event? Check these Twitter streams: AEA and AEA09.

And here are Luke W’s notes on the show.

Our thanks to the photographers, sketchers, speakers, and all who attended.

Bigthink.com/jeffreyzeldman is your BigThink channel for all your BigThink Jeffrey Zeldman needs. Now playing at that URL are three Zeldman interview clips for your pleasure: