99designs, the Australian company that has made a fortune soliciting spec work (“crowd sourced graphic design”) from naive designers, and selling $99 logo customizations to small businesses, has just invested $460,000 in a new service:

Tweaky, “the marketplace for website customization,” is the ultimate connector between companies that need quick, simple adjustments to their websites, and designer/developers seeking extra income via no-brainer side work.

Tweaky sounds like the perfect service for the harried small business owner who needs to make one or two quick adjustments to an existing website, has limited time and means, and needs the changes to be made professionally. The last bit is most important: there’s a difference between hiring a designer to make your logo bigger, and doing it yourself when you’re not a designer, don’t own Photoshop, aren’t expert in HTML and CSS, and so on. Tweaky’s promise is that only qualified designer/developers will be hired to make your $25 tweaks. My guess is that, at least initially, Tweaky will draw on the same community that currently participates in 99designs’s “design contests” (spec work), or at least it will solicit designers from that pool.

Crowd sourcing design is unethical (read Design Is A Job and Design Professionalism if you’re unfamiliar with the standards of conduct in a professional designer/client relationship—or, for now, just read this tweet, and read these two great books later), so I disapprove of 99designs, but its new child appears to have been born sinless. While some designers, possibly including the authors of the aforementioned texts, will dislike the notion of Tweaky on principle, I don’t think designers or studios will lose customers to a $25 tweak service. I don’t think it’s exploitation to accept $25 to change a link in a footer (assuming the designer gets the bulk of the fee). And I don’t think a client with an existing website should have to pay several thousand dollars engaging a designer simply to make a wee adjustment to her site. Tweaky offers customers access to real designers for quick jobs, and offers designers a work and revenue stream. That seems okay to me.

Caveat emptor: I haven’t hired Tweaky (no need), don’t know how they evaluate designer/developers before admitting them to their freelance labor pool, don’t know how much of a customer’s $25 ends up in a designer’s pocket, and can’t speak to the quality of their concierge service and follow-through. But I find their business model unobjectionable and intelligent—it fills a designer’s need for extra work and a customer’s need for quick turnaround on no-brainer mini-projects. Truth to tell, I’ve heard talk of similar networks in the works, and would not be surprised to see competitors to Tweaky sprout up soon enough. It’s the economy, smarty. 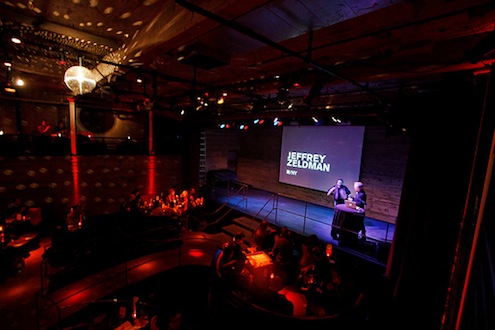 Author and Happy Cog founder Jeffrey Zeldman answers the question: what does a web designer need most? Skills and knowledge of software, of course, but empathy—the ability to think about and empathize with your user—is by far the most important. Good useful education is hard to find, and within companies there is often no departmental standardization. Good graphic design is not the same as good user experience design, he explains. In fact, “good web design is invisible”—it feels simple and authentic because it’s about the character of the content, not the character of the designer.

In addition to the streaming video, a surprisingly accurate PDF transcription is available, along with a downloadable copy of my slides. (The typeface is Joshua Darden’s Jubilat.)

So it turns out I’ll be speaking about web design this Saturday at the sold-out AIGA Gain Conference. Yes, that conference.

I am a member in good standing and was honored to be part of the AIGA site redesign.

I received your email about the AIGA Business and Design Conference and am impressed with the speakers at the main show, as well as the 20/20 presenters. You have chosen brilliant talents who have made major contributions; with such speakers, the conference will undoubtedly be an illuminating and brilliant success.

But in reading the mini-biographies of the presenters, I can’t help noticing that for all the brand directors, creative directors, Jungian analysts, and print designers, one rather significant specimen of the profession is missing. Where are the web (or if you insist, the interaction) designers?

I am probably missing someone, but I count two people with web experience, and neither gets more than 60 seconds of stage time.

In my years as a web designer, I’ve worked with dozens and met thousands of gifted, passionate design professionals who would surely love to spend three days soaking up graphic design brilliance at an event like Gain.

But if no one on the stage shares their experience—and if one of the two speakers with web experience thinks the web is a crude medium where second-rate designers create unmemorable and mediocre works—AIGA is unlikely to reach this audience.

I need hardly add that this audience makes up an ever increasing percentage of the design profession, and performs work that is global in impact.

Comments are now closed, but you can read what other people had to say.