<les misc: old: if the great movies had been websites>

if the great movies had been websites 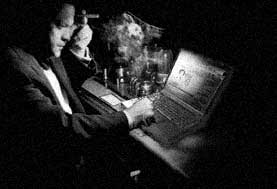 Nobody loves the Web more than we do. But we're not blind to its shortcomings. IPO Fever. Browser incompatibilities. Horrific design on a global scale.
But that's not the worst of it.
The worst of it is the pathetic scarcity of meaningful content.
And what do many Web creators substitute for content? Diary entries.

We'll admit we've seen a few sites that raise this kind of narcissism to an art form. But these great personal storytelling sites are the rare exceptions. For the most part, we get dull personal commentary with a side order of self-importance.
Here we have the most democratic publishing medium ever invented, and what do people fill it with? The meaningless daily details of their lives.
What if every potentially great new medium had been filled with "content" like this? What if, instead of actually MAKING  Citizen Kane, Orson Welles had simply published a Web diary?

Sept. 11
Dinner at Mankewicz's house. Mankewicz was drunk again. Had a fine porterhouse with those wonderful New England potatoes on the side. Can't say much for the wine, but Rita seemed to like it.

Sept. 23
Rita appears to be bored. Complains I work too much. I told her  Citizen Kane is going to be very important. "As important as our love?" she said. I hate when she sounds like a cheap novel. It's exactly the kind of remark Susan, Kane's second wife, would make. Will suggest Mankewicz work it into the screenplay.

Sept. 25
Ran into Cary Grant and Randolph Scott on the lot. I've heard the rumors, we all have, but Rita doesn't buy it. I think she has a crush on Cary Grant. Must spend more time with her.

Oct. 7
Mankewicz arranged a little party. The steaks were overdone. I complained to Joseph Cotten, and the little ham told me I eat too much. Can you imagine? I told Joseph he should spend more time worrying about his performance on the set and less time worrying about my performance at the table. For some reason, Mankewicz's wife thought that was hilarious. Laughed herself silly, while poor Joe, her husband, just scowled into his wine. I wonder if the Mankewiczes are truly happy. But then, what is happiness? Should work that question into Kane.

Oct. 11
RKO is stalling on the budget. Mankewicz is stalling on the script. Think he's afraid of offending his good friend, Citizen Randolph Hearst. No more free dinners at Randy's shack after the picture comes out. I may have to finish the screenplay myself.

Oct. 24
Rita mad with boredom. Told her to take Frank up on his offer, and stay at the Sinatra guest house for the weekend. What harm could there be in that? Oh, I know the little crooner seems to have "feelings" for her, but really, can you picture any woman falling for a pockmarked bantamweight like Sinatra? Certainly not my Rita. Nothing to worry about there. What I am worried about is this script. No progress since September. Not a word. Fortunately I still have this website, and 22,000 loyal readers a day.

Nov. 3
Ran into Alfred Hitchcock in the RKO Chatroom. I've been following his site for years. We all have. Think he feels threatened by all the publicity citzenkane.com has been getting. Well, good. Let the Buddha of British Cinema sweat, a little. Still, I told him I've always admired his work, particularly the webcast he did for 39steps.com. Might as well butter him up. I hear his wife Alma is a sensational cook, and Hitch keeps a fine wine cellar. Like to go out there and see for myself.

Nov. 21
Too depressed to update this site for weeks now. I think Rita may have "feelings" for Sinatra. Maybe more than "feelings." Asked Joseph Cotten what he thought, then bit his head off when he told me.

Dec. 3
Have decided to scrap entire  Kane script, along with the premise. Demanded Mankewicz work up a treatment based on this diary. He said Kane's life had more drama. I said, you want drama? 30,000 hits a day, boychick. He hates it when I call him boychick.

Jan. 11
Wa-hoo! We've left RKO and are in content development talks with Zap.com. The braintrust over there agrees that we should scrap the whole  Kane business, convert it to citizenwelles.com, and turn it into a combination edutainment-infotainment portal. With this site's traffic, it's a natural. Zentropy has agreed to do the backend, and some of the brighter lights from Razorfish are working up a Shockwave game based on the Welles-Hayworth-Sinatra love triangle. In the days to come, these pages will be filled with exciting contests, .40 cpm ad banners, and plenty of salty personal anecdotes from yours truly. Watch this space, boys and girls!