2006 DOESN’T seem forever ago until I remember that we were tracking IE7 bugs, worrying about the RSS feed validator, and viewing Drupal as an accessibility-and-web-standards-positive platform, at the time. Pundits were claiming bad design was good for the web (just as some still do). Joe Clark was critiquing WCAG 2. “An Inconvenient Truth” was playing in theaters, and many folks were surprised to learn that climate change was a thing.

I was writing the second edition of Designing With Web Standards. My daughter, who is about to turn twelve, was about to turn two. My dad suffered a heart attack. (Relax! Ten years later, he is still around and healthy.) A List Apart had just added a job board. “The revolution will be salaried,” we trumpeted.

Preparing for An Event Apart Atlanta, An Event Apart NYC, and An Event Apart Chicago (sponsored by Jewelboxing! RIP) consumed much of my time and energy. Attendees told us these were good shows, and they were, but you would not recognize them as AEA events today—they were much more homespun. “Hey, kids, let’s put on a show!” we used to joke. “My mom will sew the costumes and my dad will build the sets.” (It’s a quotation from a 1940s Andy Hardy movie, not a reflection of our personal views about gender roles.)

Jim Coudal, Jason Fried and I had just launched The Deck, an experiment in unobtrusive, discreet web advertising. Over the next ten years, the ad industry pointedly ignored our experiment, in favor of user tracking, popups, and other anti-patterns. Not entirely coincidentally, my studio had just redesigned the website of Advertising Age, the leading journal of the advertising profession.

Other sites we designed that year included Dictionary.com and Gnu Foods. We also worked on Ma.gnolia, a social bookmarking tool with well-thought-out features like Saved Copies (so you never lost a web page, even if it moved or went offline), Bookmark Ratings, Bookmark Privacy, and Groups. We designed the product for our client and developed many of its features. Rest in peace.

I was reading Adam Greenfield’s Everyware: The Dawning Age of Ubiquitous Computing, a delightfully written text that anticipated and suggested design rules and thinking for our present Internet of Things. It’s a fine book, and one I helped Adam bring to a good publisher. (Clearly, I was itching to break into publishing myself, which I would do with two partners a year or two afterwards.)

In short, it was a year like any other on this wonderful web of ours—full of sound and fury, true, but also rife with innovation and delight.

As part of An Event Apart’s A Decade Apart celebration—commemorating our first ten years as a design and development conference—we asked people we know and love what they were doing professionally ten years ago, in 2006. If you missed parts one, two, three, or four, have a look back.

Topics covered include: Aaron’s superhero origin story as a creator of progressively enhanced websites and applications; “we’re not building things we haven’t built on the web before;” “creating opportunities for people outside your comfort zone;” development in the world of Node.js; “every interface is a conversation;” “visual design is an enhancement;” “interaction is an enhancement;” nerding out over early web terminal interfaces; Microsoft, Opera, and more.

Sponsored by DreamHost, Braintree, and Thankful. 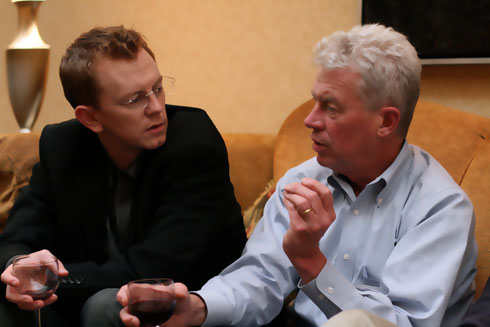