Sunday morning, while dreaming, I began receiving messages from the other world. They covered matters of etiquette when interacting with the dead, and even offered glimpses of what the spirit life is like:

These messages were conveyed clearly, and with authority. Although I knew their origin, I was not afraid. So matter-of-fact was my acceptance that I began framing what I was learning within a normal workday context. Specifically, I realized that these messages made the perfect Tweets.

For while Twitter may reduce the immense possibilities of communication to single-line banalities of 140 characters or less, it is paradoxically the perfect vehicle for distilling and broadcasting profound, irrational truths, such as those the dead share with us while we dream.

This dream also involved Robert Benchley and so many cartoonish implausibilities that it is possible that the messages I received came only from my own mind. But is that not equally infinite?

(The dream’s plot involved a luxury cruiser, torpedoed in World War II. Benchley, urbane in middle age, piloted a series of unlikely rescue vehicles, including a school bus that somehow managed to navigate the ocean and deftly avoid smacking into large chunks of wreckage. It was night, and raining, and black and white. A young Michael Keaton, who was sometimes a young Jack Nicholson, also played a role in the endless and pungently fraught narrative.) 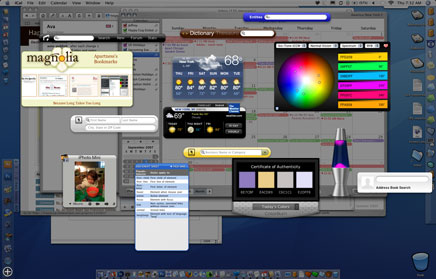 What’s on your dashboard?

Has this happened to you? You’re using the iLike social music discovery network and things are humming along nicely. Then one day, because of a brief iLike.com server hiccup, the iLike Sidebar for iTunes is unable to download and refresh your friends’ photos. Instead of your music pals’ smiling faces, you see the classic “busted GIF” icon that web browsers use to denote “image file not found.”

Here is a screenshot of the iLike Sidebar with missing images.

Here is a screenshot, a few days later, with all friend images missing.

It’s what my iLike sidebar has looked like for the past two weeks. It may be what it will look like forever. Has anyone else encountered this problem? Anybody found a solution? Nothing I’ve tried works.

Like every other recent website, iLike identifies itself as a beta. When you identify yourself as a beta, and you’re adding 300,000 users a day, it’s to be expected that your technology may be imperfect, and it’s also understandable that you may not have time to respond to every user who contacts you about a problem. Hell, I’m not a beta (and I’m not adding 300,000 users a day) and I can’t respond to everyone who contacts me. I get it.

In the scheme of things, a broken feature in a free web app is no big deal. I still like iLike. But if anyone knows how to squash this bug, I’d like it even better.

AIGA | Aquent Salary Survey Calculator
Are you getting paid what you should? Find out with this free online calculator, created by AIGA and Aquent after surveying nearly 6,500 design professionals.
Pantone’s Fall Fashion Color Report
The fashion forecast is for cool, calm colors from the earth. Wear them tomorrow, see them on your website the day after.
Magic 8_Ball on ‘Zune’
Daring Fireball has fun kicking Microsoft’s me-tooism.
CreativeIQ: Create Letterhead Templates in MS Word
Creating letterhead templates in Microsoft Word that don’t suck.
Most Inspired
Design inspiration aggregation.
Netdiver: Outstanding
Design inspiration, collected by Netdiver. Sharp concepts and fresh perspectives.
“People nearby started to panic”
A mobile phone rings on a London-to-New-York flight.
Time Capsules: Douglas Coupland: September 11
From the vantage point of a 52-day book tour that began on September 11, 2001, the author recalls the surreal first days of post-9/11 America.
Congress: Hall Pass Revoked

If Net Neutrality didn’t do enough to get you squirming HR5319 AKA Deleting Online Predators Act AKA DOPA should serve as proof that Congress should no longer be allowed to vote on any laws governing the internet. In case you missed the news, DOPA basically will require all public schools and libraries to block access to social networking sites and chat rooms.

The Agency Model is Dead – Blue Flavor
Brian Fling of new agency Blue Flavor lists “signs of the decline in the traditional agency” and discusses his agency’s nontraditional approach.
AppZapper – Making uninstalls easy
AppZapper for Mac OS X lets you confidently try new apps while knowing you can uninstall them easily. Drag one or more unwanted apps onto AppZapper and watch as it finds all the extra files and lets you delete them with a single click.
Bokardo: Why Netscape Will Succeed
Bokardo, a blog about social web design, says Netscape’s reinvention of itself as a mass-market version of Digg will succeed.
Zach Klein: Connected Ventures + IAC
The guys behind collegehumor.com sell to Barry Diller’s InterActiveCorp.

Waferbaby is both a site and a person. The site has been around for about a dozen years, the person (Daniel Bogan) for somewhat more. But wait. Now Waferbaby is also a third thing. It is also the content management system (CMS) that Waferbaby the person built to drive Waferbaby the website. The website has many features. So does the CMS. Why do you care? Because you can use the CMS if you want to. Waferbaby, the open source content management system, built with Ruby on Rails and “freely available under a liberal BSD license” is yours for the taking. Be gentle.

Point B Studio’s Enhanced Simple PHP Gallery is free, open-source software that lets you post photos online. The brainchild of Rich Pedley and Paul Griffin, the program is thriving at the nurturing bosom of brilliant web architects and developers.

With version 2.0, it has been completely overhauled to support detailed annotation (“footnotes”) of objects (such as artwork or photos), including citations, dimensions, latitude/longitude and other identification metadata.

A demo page lets you log in as an administrator and put the program through its paces. Point B welcomes comments and suggestions. Happy gallery-mongering!

(Disclaimer: I sit on Dandelife’s advisory board.)

Dandelife is a social network built around the telling of your life’s stories. You can use Dandelife to create your own personal biography and then share that with the rest of the world. Imagine all your own notes on all the people you’ve met, the places you’ve been, the events you’ve gone to and the stories you could tell about them all. That’s your Dandelife.

Co-founder Kelly Abbott, late of Airshare.org and other socially conscious web projects, is that rare entrepreneur whose primary motivation is not cash but community. Soft-launched this week, Dandelife isn’t perfect yet, but it is already attracting storytellers, and Abbott hopes to recruit more creative people spinning more yarns, “making the site that much more fun to waste time at.”

Tags are beginning to emerge: there are drinking stories, nickname origin stories, 9/11 stories. People are joining and sharing. Here are a few stories that struck me: