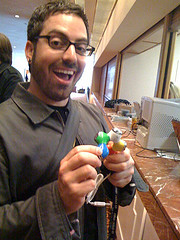 JASON SANTA MARIA (website, Twitter) will be our guest Thursday December 9th, 2010 during Episode No. 30 of The Big Web Show (“Everything Web That Matters”), co-hosted by Dan Benjamin and recorded at 1:00 PM Eastern before a live internet audience.

Jason is a self-described Graphic Designer living in sunny Brooklyn, New York. He is the founder and principal of the design studio Mighty, creative director for Typekit, a faculty member in the MFA Interaction Design program at SVA, co-founder of A Book Apart (Brief Books for People Who Make Websites), vice president of AIGA/NY, founder of Typedia, a shared encyclopedia of typefaces online, and creative director for A List Apart for people who make websites. A former designer and creative director at Happy Cog, Jason has worked for clients such as AIGA, The Chicago Tribune, Housing Works, Miramax Films, The New York Stock Exchange, PBS, The United Nations, and WordPress, “focusing on designing websites that maintain a balance of beauty and usability.”

The Big Web Show records live every Thursday at 1:00 PM Eastern on live.5by5.tv. Edited episodes can be watched afterwards, often within hours of recording, via iTunes (audio feed | video feed) and the web. Subscribe and enjoy!