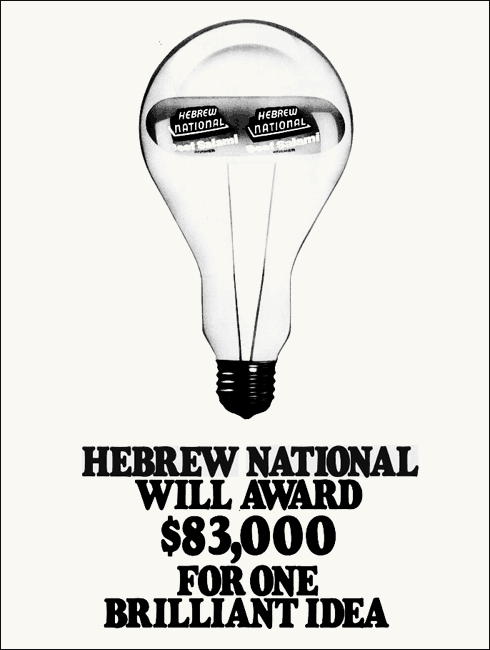 In the late 1980s, while making efforts to move to New York City, I came up with the winning ad campaign for Hebrew National Kosher Salami. Only I didn’t win.

Hebrew National held a contest to see if people outside Madison Avenue could come up with a great ad idea for their 83% fat free salami. The grand prize was $83,000.

Even in New York, $83,000 would have more than covered a moving van, broker’s fee, and first and last month’s rent.

But creating the winning ad carried a benefit even bigger than the cash for someone like me who was trying to break into New York advertising. I’d worked for a couple of years at Washington, DC-area ad agencies, one of them pretty good, but that and my portfolio bought me nothing in the competitive New York advertising job market of the late 1980s. There were kids coming out of school with better portfolios than mine.

Winning that contest, I believed at the time, would make a New York ad agency take me seriously.

My then-girlfriend Eva S and I submitted an ad built around the headline, “You should be so fat.”

Well, we never heard back after entering the contest, and months passed the way they do.

I continued to drive back and forth from DC to NYC looking for jobs and an apartment.

A couple of times I flew to New York for an interview in the middle of my work day. I told my DC-area-agency creative director I was seeing a doctor. I still feel bad about that lie.

One day I open a magazine, and there’s a picture of an athletic woman wearing a leotard, working out.

The headline reads, “You should be so lean.”

Lean. You should be so lean.

It was our concept made safe. “You should be so lean” was a faster read and a much less interesting idea.

Hebrew National had said in the contest rules that, in the event of duplicate ideas, they would pick the one that was best executed. I am certain today that several people submitted similar ideas and Hebrew National and its agency chose the best-looking comp, which was not mine. Quite probably the winner even wrote “You should be so lean.” All perfectly ethical.

But at the time I was sure that we had gotten ripped off.

So I confided in the president of the DC-area agency where I worked—like he needed another reason to fire me—and asked him if I should sue Hebrew National.

I was thirsty and not very bright. A while later, for many reasons, the agency let me go, surprising absolutely no one but me.

But meantime I’m in the bar buying my boss a drink on his time.

He tells me something I’ll never forget: a big company has lawyers on retainer, and you don’t.