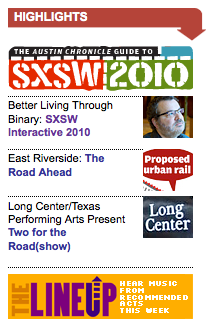 P Is for Publishing. And publishing, as you’ve heard, is dying. … But “the printed word will be around long after many of our digital creations are gone,” Zeldman says, “either because books don’t require monthly hosting and blogs and websites do … or because the languages and platforms for which a particular digital creation was published will become obsolete.”

…[Jason,] Mandy and I are about to launch a printed book series, called A Book Apart, which derives much of its thinking and some of its formatting from what we’ve learned about PDFs in the past 10 years,” says Zeldman. The Mandy he mentions is Mandy Brown, creative director of Etsy and former creative director at W.W. Norton & Co.; she’s also one of the people speaking on the New Publishing and Web Content panel that Zeldman’s organizing for this year’s Interactive Fest, along with Happy Cog’s Erin Kissane, Harper’s Magazine editor (and Harper’s website creator) Paul Ford, and Lisa Holton, founder of new-media company Fourth Story Media.

…Everyone on the panel is committed to the digital future,” Zeldman says. “But we are also all committed to the book.” And how will their—how will our—relationships to books change, and how will those relationships remain the same, as the digitization of printed matter proceeds faster than most chain saws can spin? “How,” asks Zeldman, “can we be truthful and wise as editors, publishers, writers, journalists, and marketers straddling this scary yet exhilarating new divide?