HERE I AM at the Palace on Market Street for another thrilling installment of An Event Apart.

Starting Monday, December 12, 2011, follow the live Twitter stream on A FEED APART, the official feed aggregator for An Event Apart.

Hum along to the interstitial AEA Playlist on Last.fm or Rdio. 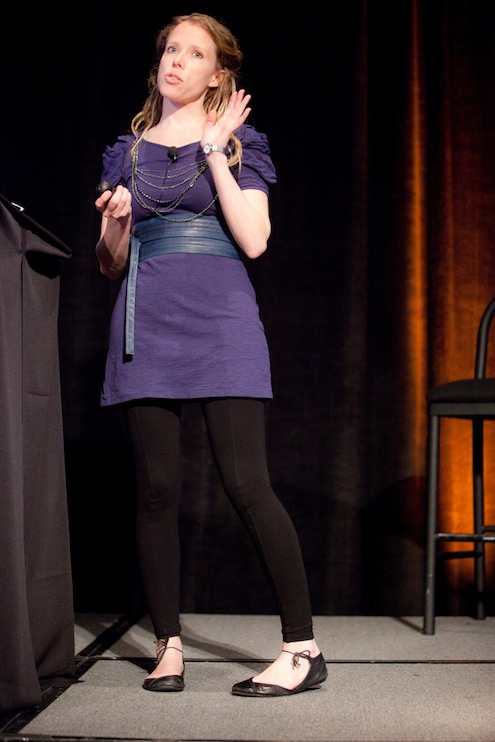 Live from San Francisco, it’s An Event Apart, for people who make websites. If you can’t join us here today and tomorrow, enjoy the live feed, designed and coded by Nick Sergeant and Pete Karl.

Someone could write a study on how moving and changes in marital status can cause a domain to lapse, and that someone could be me.

Now the right hand knows what the left hand is doing. Happy Cog™ and Airbag Industries announce the merger of our firms, effective today, August 3, 2009. The resulting super-agency will be called Happy Cog, and will maintain studios in three cities:

The connection between our agencies goes back years. Greg Storey tells that tale.

From an internal perspective, this merger of people and resources, freely shared across all three agencies, means we can now bring boutique-style craftsmanship to any size job. If you’re a client, you no longer have to choose between “big enough” and “good enough” when selecting a vendor. You can hire a big agency that designs and cares like a small one.

With the mix of people now at our disposal, you can expect exciting product development as well.

Staffed up and pumped up, Happy Cog East and Happy Cog West will specialize in client services, web design, and development. Happy Cog Studios in New York, while also designing selected websites, will focus on business strategy and content development via A List Apart Magazine, An Event Apart design conference, and other ventures.

There’s a new aneventapart.com in town, featuring a 2009 schedule and a reformulated design. I designed the new site and Eric Meyer coded. (Validation freaks, only validator.nu is up to the task of recognizing the HTML 5 DOCTYPE used and validating against it; the validator.w3.org and htmlhelp.com validators can’t do this yet. Eric chose HTML 5 because it permits any element to be an HREF, and this empowered him to solve complex layout problems with simple, semantic markup. Eric, I know, will have loads more to say about this.)

Family branding concerns drove the previous design. Quite simply, the original An Event Apart site launched simultaneously with the 2005 redesign of A List Apart. Jason Santa Maria‘s stripped-down visual rethink was perfect for the magazine and is imitated, written about, and stolen outright to this day. It was a great design for our web magazine because it was created in response to the magazine’s content. It didn’t work as well for the conference because its design wasn’t driven by the kind of content a conference site publishes. But it was the right conference design for 2005 because the goal at that time was to create a strong brand uniting the long-running web design magazine with the new web design conference that sprang from it.

New goals for a new environment

In 2009, it’s less important to bolt the conference to the magazine by using the same layout for both: by now, most people who attend or have thought about attending An Event Apart know it is the A List Apart web design conference. What’s important in 2009 is to provide plenty of information about the show, since decisions about conference-going are being made in a financially (and psychologically) constricted environment. In 2005, it was enough to say “A List Apart has a conference.” Today more is needed. Today you need plenty of content to explain to the person who controls the purse strings just what you will learn and why a different conference wouldn’t be the same or “just as good.”

The redesign therefore began with a content strategy. The new design and new architecture fell out of that.

The other thing I went for—again, in conscious opposition to the beautifully understated previous design—was impact. I wanted this design to feel big and spacious (even on an iPhone’s screen) and to wow you with, for lack of a better word, a sense of eventfulness. And I think the big beautiful location images and the unafraid use of high contrast help achieve that.

Reinforcing the high contrast and helping to paint an event-focused picture, wherever possible I used action shots of our amazing speakers holding forth from the stage, rather than the more typical friendly backyard amateur head shot used on every other conference site (including the previous version of ours). I wanted to create excitement about the presentations these brilliant people will be making, and live action stage photos seemed like the way to do that. After all, if I’m going to see Elvis Costello perform, I want to see a picture of him onstage with his guitar—not a friendly down-to-earth shot of him taking out the garbage or hugging his nephews.

So that’s a quick overview of the redesign. The store is now open for all four shows and the complete Seattle show schedule is available for your viewing pleasure. I hope to see some of you in 2009 at our intensely educational two-day conference for people who make websites.

Take a dip in the Flickr photo pool from An Event Apart San Francisco 2008. Day Two is about to begin.

Early tomorrow, I leave for San Francisco. Headed into my laptop bag, along with my MacBook, are…

In my carry-on bag, in place of the usual dress shoes and gym shoes, I’m packing Crocs. It’s not my normal travel or presentation attire, but my foot (although much better) is still a bit out of whack, and you’ve gotta do what you’ve gotta do.

See some of you in San Francisco and the rest of you here and there.

An Event Apart thanks its attendees, speakers, and sponsors for a great 2007, and announces dates and locations for 2008. Please join us next year! New Orleans, Boston, San Francisco, Chicago.