RACHEL ANDREW—longtime web developer and web standards champion, co-founder of the Perch CMS, and author of Get Ready For CSS Grid Layout—is my guest on today’s Big Web Show. We discuss working with CSS Grid Layout, how Grid enables designers to “do something different” with web layout, why designers need to start experimenting with Grid Layout now, how front-end design has morphed into an engineering discipline, learning HTML and CSS versus learning frameworks, and the magic of David Bowie, RIP.

Sponsored by A List Apart and An Event Apart. 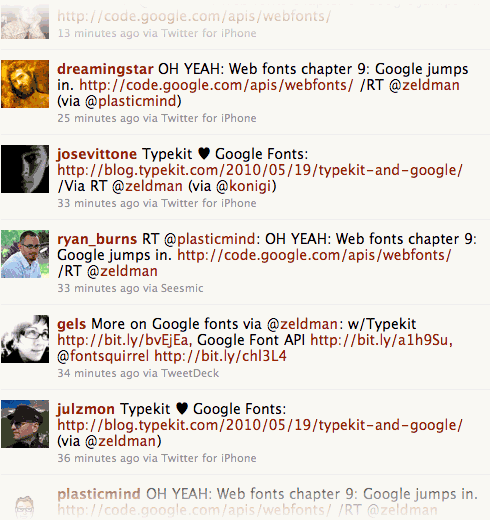 THE long-planned inevitable has now been announced. With open-source-licensed web fonts, web font hosting, and add-a-line-to-your-header ease of configuration, Google has joined Typekit, Font Squirrel, Ascender, Font Bureau and others in forever changing the meaning of the phrase, “typography on the web.”

The Google Font Directory lets you browse all the fonts available via the Google Font API. All fonts in the directory are available for use on your website under an open source license and served by Google servers.

Oh, and Typekit? They’re in on it, and they couldn’t be more pleased.

A Compatibility Master Table provides a snapshot of the status and results of all testing; Mobile Compatibility Tests are also in development.

It’s a great resource from an expert who really cares, and who has the time and expertise to find things out for the rest of us. Thanks, PPK!

Between hurricanes and hericanes, you could easily have missed the technology news. Released yesterday in public beta, Google Chrome is a standards-compliant web browser created to erode Microsoft’s browser dominance (i.e. to boost Google’s web dominance) while also rethinking what a browser is and does in the age of web apps and Google’s YouTube.

The new browser is based on Webkit, the advanced-standards-compliant, open source browser engine that powers Apple’s Safari for Mac and PC, but Chrome currently runs only in Windows. You figure that out.

To compete with Microsoft, the new browser must offer what other browsers do not. The risk inherent in that proposition is a return to proprietary browser code. It is not yet clear to me whether Chrome will compete the wrong way—offering Chrome-only features based on Chrome-only code, thus prompting Microsoft to rethink its commitment to standards—or the right way.

Competing by offering features other browsers do not (easier downloads, streamlined user interface) or by consolidating other browsers’ best features (Opera’s Speed Dial, Firefox’s auto-complete) avoids this risk, as improvements—or at any rate, changes—to the browser’s user interface have no bearing on the display of existing web content.

Competing by supporting web standards ahead of the pack, although not entirely without risk, would also be a reasonable and exciting way to compete. When one browser supports a standard, it goads other browser makers into also supporting it. Because Safari, for instance, supports @font-face, Firefox is not far behind in supporting that CSS spec. @font-face raises font licensing problems, but we’ll discuss those another time. The risk that concerns us here is when a browser supports an emerging specification before it is finalized, thus, essentially, freezing the spec before it is ready. But that is the traditional dance between spec authors and browser makers.

For web standards and web content, we once again live in interesting times. Welcome, Chrome!